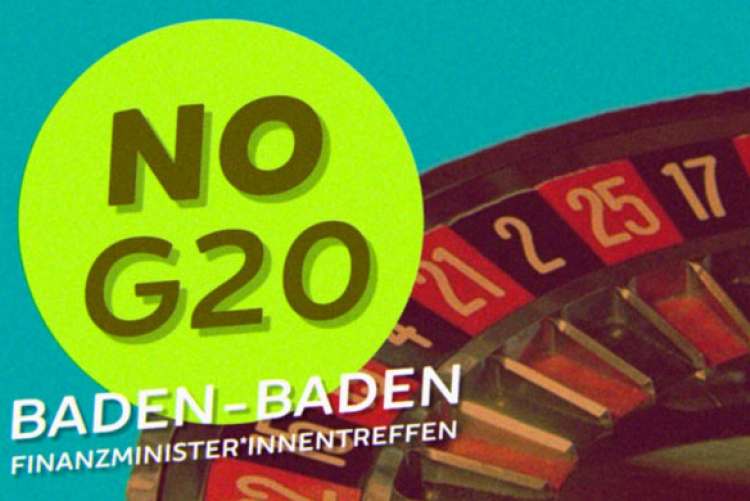 The Finance Ministers of the G20 countries will meet on the 17th and 18th March in Baden-Baden in preparation for the G20 summit in Hamburg taking place from July 7th – 9th. Twenty governments, together with the representatives of the global finance institutions, will decide on policies which shape the future of people in every country of the world.

The G20 states differ in their political systems and economic strategies. However, collectively they stand for policies which focus on economic growth, profit maximisation and competition, and whose main beneficiaries are global corporations, the wealthy and investors in the financial markets.

Although their meetings have frequently professed their intentions to make reforms, they have made no significant progress in the regulation of banks and the parallel banking sector, in the closing of tax havens or the prevention of tax fraud and tax evasion.

The G20 stands for austerity policies which hold economically weaker countries to ransom and drive them into ever increasing debt. It stands for the politics of impoverishment, which shifts the costs of economic, environmental and financial crises onto working people and the poor. It stands for a policy of borders determined solely by their usefulness to the system, in which those judged to be superfluous fall by the wayside. The global consequences of these politics are social inequality and exclusion; migration and impoverishment; environmental destruction and climate change; and war.

But there are alternatives!

In solidarity with movements in other countries we want to take to the streets of Baden-Baden and show clearly that: A different world is possible!
We are standing up for a world which is grounded in solidarity with the needs of people worldwide and not on protection of banks and investors.